Now this is a cute town ! I could really live here … If they didn’t get 6′ of snow each winter that sticks around until May ! (And a howling rainstorm outside the Rv right now that the locals think is nothing . It’s something !)

We went downtown and started by touring the Capitol – best one yet ! Amazing history in their paintings , but the stone that it is built out if is really the show stopper – wow oh wow is that place beautiful ! The stone came from 6 countries and 8 other states , but even the marble from Wisconsin is pretty . In 1998, they were in the middle of a $106 million dollar renovation – and they did it right . Glad we got to see the finished product .

Best part of the tour was the repeated references to “the western territory ” and how remote the east coast people thought Wisconsin was . Reminded me of going to school in Delaware and having people be confused about where Oregon was .

We went to the observation deck and took in the 360 views with a hundred other tourists . The kids were glad to see we’re not the only nerds who like capitols . They use the 4 streets that form a square around the Capitol for a thriving farmer’s market . We could tell the vendors and people were so happy to be out in the sun . The temp said 72, but it felt like high 80’s.

We walked down State Street to the University of Wisconsin. Wow, nice shopping and restaurants. You could spend a week and not get into all of them . The street entertainment was great , but the hundreds of cyclists were even better – it’s a very bike friendly town .

Went into the school bookstore and Dan donned the hat below – much to the chagrin of our teenagers ! 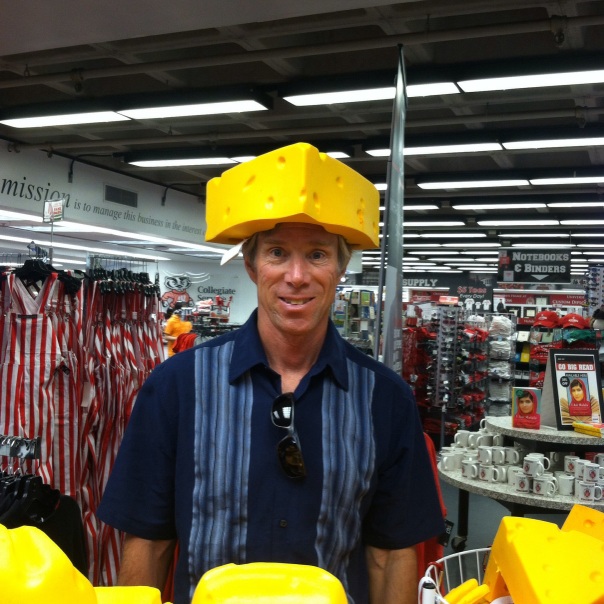 The campus itself is set up on a hill , and Eliza and I were glad we hadn’t tried to look good – we both had on sensible shoes . Quite the trek down to Lake Mandota, but worth it . A few thousand other people on the shore agreed – the place was hopping! Sailing lessons , restaurants , swimming – it was all packed . I was quite proud of myself for NOT diving in and embarrassing the kids yet again .

But Dan did again !!! Driving out of town , Dan saw an Erik’s bike shop car and rolled down his window to say hello . We had a nice chat with Jim and I am forever off the hook for talking to the guy from Denmark in traffic on the Golden Gate Bridge. The kids couldn’t believe it !