Picture above from 8:34 a.m.!
This was one day we’ve talked, dreamed and looked forward to for years! Ever since we read that the roller coasters at Cedar Point are the best in the USA, we’ve wanted to visit. Dan even went off coffee six weeks earlier so he could ride. Unfortunately, it started out great and quickly went south.

We had pulled into the campground at the Cedar Point park the day before, and did battle with “May flies” that liked the dark color of our rig. The young Jamaican man who came to spray for them said it wouldn’t help, and he was right. But out our back window was the oldest wooden roller coaster in the park, and we couldn’t wait to ride.

Just like Disney resorts, because we stayed on property, we got in an hour earlier than the general public. We knew that it would be the best part of the day, and we didn’t know how right we were!

We were 15th in line at the north entrance, and watched as they tested a Level 5 coaster above our heads. I began to have second thoughts about riding it, but we were talking about the other Level 5’s, so I was easily distracted. The kids were still waking up, and were getting excited.

We walked to the Iron Dragon first and had the ride all to ourselves. Eliza had seen the video of it online and knew it would be an easy first Level 4 ride. She was right, of course. So fun! We were the only ones on it and I screamed loudly at every sharp turn. It was a total blast.

Next we hustled to the Millennium Force. This is one of the top 3 rides in the park, and we wanted to do it before the lines were hours long. We were able to watch it as it went up over 200’ for the first hill, and heard the screams as it went down about 90 mph. I thought I was going to be sick, but I was determined to ride it with the kids. It was only 2 minutes, how hard could it be?!

Hard. Scary. Not constructed correctly because I came out of my seat a couple times. It was awesome!!! I think I appreciated the views of Lake Erie, but I’m already starting to block how scary the ride was. Why oh why did I ride it?!

Our third ride was the Maverick. The kid in line in front of us said it was his favorite and he’d probably ride it at least 5-6 times that day. Then he complained to his Dad about all the tourists in the park – obviously a local with a season pass. I was glad it got such a good review, because it was another Level 5.

Dumbest ride ever. Really. Should be closed down. Not only was the first incline too steep, but the OVER 90 degree hill after that turned in on itself. Who thought of that?! I was screaming half the ride, and hitting my jaw on the sides of our seat the other half. I could hear Dan grunting behind me, but Nate wasn’t screaming his infamous “I’m gonna die”, so I knew he was fine. Eliza, sitting serenely next to me, was just smiling. That’s what she did all day. Smile and/or enjoy herself. The two can be mutually exclusive.

We stumbled off the ride, and then quickly went outside. Dan was saying he didn’t feel well, and we went looking for a men’s room. He didn’t make it further than 50 feet before he barfed. He was green. He said the first over 90-degree incline did it to him, and he barely kept from passing out the rest of the ride. Watch the video online if you want to experience this “fun” ride.

So less than an hour into the day, and 1 Indian down. I was really worried about him, but he didn’t want to ruin the day for the kids, and he was raised in Iowa, so he moved from bench to bench as the kids went on more rides. He gives up coffee, drives almost 10,000 miles, and gets sick. No fair.

I did one more ride with the kids, but it’s not as much fun riding single as it is screaming with your kids, so I bowed out. I was also worried about Dan being alone and passing out; he was still hurting. Luckily, the people watching was incredible. If I could have taken a picture of every weird tattoo I saw, I would have had my camera full by noon. I only heard one other language, but saw more brands of cigarettes than I have in the past 20 years. 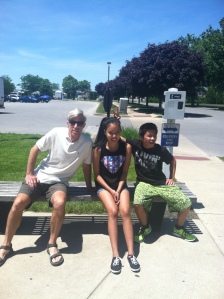 We went back to the rig for lunch and Dan was prone before the rig door closed. He was exhausted. The rest of us ate lunch and rested up for the afternoon. We couldn’t talk him into resting until dinner, so we rode the shuttle back to the main entrance and it was as if we had entered a different park. It was beyond packed. Barely room to walk and tons of people with those gigantic stuffed animals that made it hard to get around.

The kids went on a few rides, and then decided to go see how long the Top Thrill Dragster line was. The two “hosts” at the entrance said it would move fast, but the sign said it was a 90-minute wait. Of course, because it’s another of the top rides, everyone wants to ride it. Everyone except Dan and I. We found a spot in the shade and I read a book on my phone. I never would have predicted that I’d be reading in an amusement park, but there weren’t any other rides I had to do, so I just relaxed and kept an eye on Dan. He wasn’t green anymore, more of a light grey.

Almost 80 minutes into their wait, the ride broke down. They took the cars off the track, and a man much older than us “worked” on them. They did a test with the cars, and it went up the 425’ track, only made it part way up, then rocketed back down. They did another test and it barely made it up and over the top, and raced down. We weren’t sure if it made it to 120 mph, because it took longer than the 17 seconds it usually did. We were hoping the kids would get out of line, but knew that after waiting so long, they’d be disappointed if they didn’t get to ride. We’d already done our due diligence on the safety of the rides, so we didn’t make them get out of line. After two more cars of people went, we saw Nate and Eliza in line. Eliza’s fear that she voiced before getting in line was that the ride would get stuck at the top. And here she had just seen the ride slow and barely make it over. She had obviously been crying, but she was not budging from the line. We found out later that everyone in line passed the time by telling stories of other rides that had broken down, and how this one did quite often.

They got into their car, and it pulled forward to the staging area. The ride itself is only 17 seconds long, but they leave you at the start, with a loud music track playing the sounds of a revving engine of a dragster, for much longer than necessary. They really milk the anticipation for all it’s worth. The kids were in one of the back cars, and I watched as they sat there getting ready to be shot up and over. Nate stared straight ahead, and Eliza’s face changed from fear to pride. It was absolutely the worst moment so far in my life as a mom. I couldn’t believe we let them do this ride!

Of course, they made it down safely and were there to greet us at the exit before we expected them. I was almost in tears and was so grateful that they were fine. And off we went so they could go on more rides, like nothing had happened. Argh!!!

I can’t wait to read what the kids think of it. Nate didn’t really want to go on all the rides, but he did it for Eliza. He was so courageous and I was so proud of him. Eliza got to ride 19 different rides and would have ridden the Top Thrill Dragster again at 10 p.m. if we had let her!

So the day wasn’t quite what we expected, but we all lived through it. I think the memories will be better because there was some calamity to it. We dreamed and planned for an adventure, and that’s what we got. We talked about staying an extra day and coming into the park, but we knew there was no way to top what we’d already experienced. And we wanted to live another day!