1.  Got on the road behind a paint striper truck that took 30 minutes to go 5 miles. Frustrated but happy.  At least it wasn’t raining.

2.  Drove through the worst traffic since Houston.  Really, people, use a signal!  Don’t cut so close in front of us, we cannot stop on a dime.  Quit looking at our Oregon plates and then staring at us, not smiling. We are not aliens!  We were frustrated, but amused.

3. Dan wrote down the directions we needed to follow because we had so many lane changes for exits.  I was so grateful.

4.  The on board computer wanted us to go into Manhattan. With an RV our size. That gave us a good laugh.

5. We drove over the George Washington bridge.  49 million cars and trucks go over it each year. We had a beautiful view of the water and the city and we were so happy to almost be to our campsite.

6.  Pulled into Liberty Harbor RV and Marine, Jersey City, New Jersey at 2 p.m. and we were pleasantly surprised.  We were expecting much worse, so we were relieved.  It’s a big parking lot, “converted” to RV spaces, and online it looks like the spaces would be so tight you couldn’t get your awning out, but Dan was able to back right in and we had room for the tow in front of us.  Surprised, relieved and  so excited to be so close to NYC!  So proud of Dan to have accomplished driving there safely.

7.  We went to turn on electrical items, and nothing was working. The right side of the rig wouldn’t light up and even plugging into shore power did nothing.  We were so worried and upset. What could be wrong NOW?  Again, really?  Could this dang thing just work?!  Called Oregon, they thought it was one thing.  Called our back up, he said to take it to an RV shop 130 miles away – in a week.  Called an RV repair guy that the park recommended on our check-in information and Paul happened to be 30 feet away, in the RV office, shooting the breeze with the guys before he left for another call – hours away. He came right over and between he and Dan, they fixed it and the faulty charging outlets.  In less than an hour!  How happy were we!

8.  Looked out the driver’s side window, and there through the trees and masts was the Statue of Liberty.  In plain sight!  We were excited.

9.  We walked along the little inlet to the Hudson River and a spectacular view of New York City.  We picked this campsite so we could be close to the city, and not have to drive into it from another campground 60 miles north each day.  We were so thrilled that our choice turned out to be right.   It had been a long day, but we made it safely, and we were at NYC for the whole week. We were looking forward to what it would bring and were so pleased that we had made it to such a huge goal of our trip.  To say we were happy is an understatement! 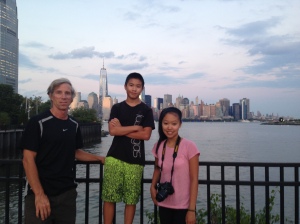