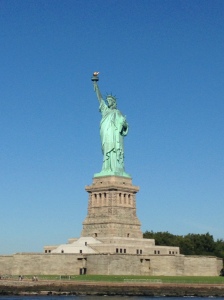 We were just there!  Thanks to Dave, we got tickets months ago to go into the Statue itself, and climb up the 377 steps to the crown.  I didn’t look over the side of the tiny stairs as we went up because I was too busy looking at the inside “walls” of the Statue itself.  They didn’t look as substantial as I thought they would be.

The boat ride over was packed with other tourists, as was the island and the museum in the base.  It was an out-of-body experience to be there because we had talked about it for so long.  We were there! We took the kids to the top! 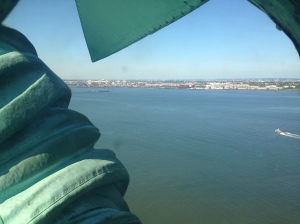 This was the view – looking south toward Staten Island.  It was such a huge symbol of freedom for the immigrants, and here we were, scrambling around inside it.  We are so lucky.

We went to Ellis Island next, and I was very upset when I learned that the immigrants who came under the harshest questioning were the poorest ones, those in the lower decks of the huge ships.  Those in first and second class were questioned on board, and they weren’t forced to go the island hospital if they were sick or had a wart on their finger.  One poor grandmother from Italy was sent back for that wart, while the rest of her extended family was let in.  They never saw her again.  After reading another dozen stories like this, I was ready to go.  The museum was really well done, and the audio tour was excellent.  The island was hit hard by Hurricane Sandy, so many of the exhibits were missing, and the outbuildings weren’t open.  We’ll have to go back someday to see the rest!