Okay, today was a waste of good gas, but we never would have known that if we didn’t go…! We got up early and drove the two hours to the Hershey factory in the town of the same name. Everything in the town is named something chocolate related – even the schools.

With dismay, we drove into the huge parking lot that was already half full. What were all these people doing here so early? We knew there was an amusement park next to the factory, but had no idea it would be this crowded. Oh, wait, we finally figured it out – it’s the Friday before Labor Day – what are we doing here?!!!! We know better than to go anywhere on these 4 days!

We clomped along with 100 other people in a pack to the factory and Eliza led us to where the tour started. We had looked Hershey up years before and had it on our list of places to see. We really wanted to see how they make chocolate

An employee directed us onto a moving floor onto a ride that was big enough for 4 of us. I was laughing already and when I glanced at the other 3, I could see they were disgusted. This was not what we expected and I was delighted. For the next 15 minutes we rode and watched short film clips, saw a mock up of how chocolate was made, and were serenaded by singing cows. That part was hilarious. It was like a 15 minute commercial!  Again, not what we expected.

The end of the tour drops you into the gift shop, of course, and it was the biggest we’ve seen yet. You name it, you could buy it with a Hershey name on it. They were already set for Halloween. There were stacks and stacks of candy everywhere we looked and people were buying in what looked like a frenzied manner! 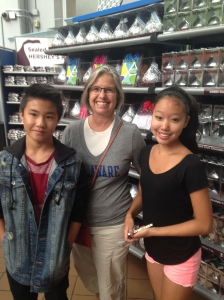 As I told Uncle Bob later, it wasn’t as good as the Jelly Belly tour we had done together, because we didn’t learn one thing. It did smell nice! And if we hadn’t made the drive, we would have felt like we missed something we had really wanted to see. We are trying to not have any regrets on this trip.

It was noon when we came out into the sunshine, and as we were in Amish country, we looked for a good place to eat lunch. We found Yoder’s Pennsylvania Dutch Buffet and our only regret is that our stomachs couldn’t hold more. Nate was in heaven! His first plate was full of meat and potatoes and bread and I took a picture for Grandma Helen – she would be proud. 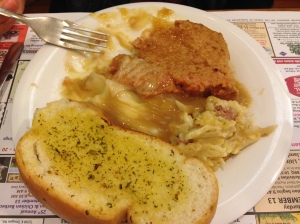 I didn’t take a picture of Dan’s lunch because it was already half gone by the time I took this pic.  And Eliza was moving too fast on her plates of mashed potato’s!

The drive home would have been better chauffeured, because we all wanted to take naps. We got home and did just that. Not the day we expected, but the gas was worth it for the lunch!