Today is 9/11 and we aren’t quite sure what to expect in D.C. Will the security be even more restrictive? Will there be more patrols on foot, horse or bike? Will the terrorists hit our beloved country again?

We rode the metro in uneventfully, and made it to the Washington Monument in time for our 10 a.m. tour. The tickets are free to go up, but if you buy them online beforehand, you have to pay a $1.50/ticket fee. Even though we are after Labor Day, we are finding things busier than we thought it would be. We were glad we had bought them because there was a huge school group there with us.   The flags surrounding the monument were all flying at half-staff, but everything else looked the same. 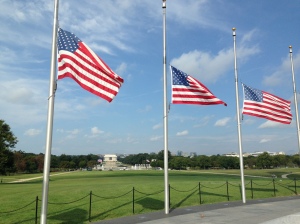 We went up the elevator, and jockeyed around the school kids for a view out of each one of the windows. The picture below is my favorite view – facing the Lincoln Monument way at the far end, with the Reflecting Pool and the World War II monument closer to us. It’s a beautiful view on any day, but especially when it’s hot, humid and sunny. 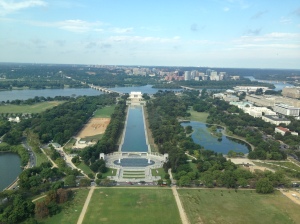 We walked down to the WWII Memorial next, and I was surprised to see that there was really no explanation of it.  Each state is represented by a pillar and a wreath, made of granite from the mountains in New Hampshire that we hiked. There are 4,000 stars in one area that represent the 400,000 Americans who died, and are a tribute to the gold star that was the symbol of family sacrifice at the time. The Rainbow Pool and fountains were pretty and enhance the peaceful setting. 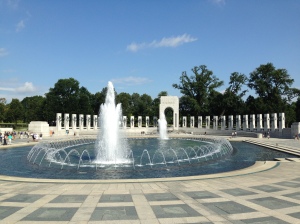 It was a perfect day for walking to all these outdoor monuments and we enjoyed the stroll in between them, too. We got to the Vietnam Vets Memorial, and I stood in awe to take it in. It’s so well designed, with the 58,236 names on the black marble wall etched in order of when they died. Tourists were looking up vets in the “name books” in another area, then they could go to the wall and see the name. Dan looked up some men from his hometown, and I looked up Lauderdales,  and unfortunately, many were listed.   There were a few items left in front of names – hearts, ribbons, and flowers – and the mood was very somber.

We walked to the Lincoln Memorial next, and as a perfect replica of a Greek temple, it’s still one of my favorites. The huge Colorado marble steps are a fun place to take pictures, and then turn around and face the Washington Monument and The U.S. Capitol and take more! The quotes on the inside walls are inspirational, with both his famous Second Inaugural Address speech and the Gettysburg Address inscribed on the walls inside. It was great to see the light bulb go on for the kids – we’d recently been to Gettysburg and stood where he gave the speech.

We went outside and around the back so I could show them where you used to be able to view JFK’s flame, across the bridge over in Arlington National Cemetery. I made the mistake of looking up and seeing the dirt and spider webs and birds’ nests – I don’t remember the monument being in this condition years ago. We went back inside to take more pictures with his seated statue made of Georgia marble.   We were joking about how we were waiting for him to talk like he did in the 2006 Ben Stiller movie, “Night at the Museum”! The area was packed and it was very special to see that people from all over the world liked the monument as much as I do.

We hiked to the Korean War Memorial next, and again, we were in awe over how well it is constructed. It shows 19 soldiers in combat gear struggling through grass and juniper bushes, to depict a squad on patrol. There is also a long black granite wall, with images sandblasted onto it. It’s in the form of a triangle, then it intersects a circle, which is The Pool of Remembrance. Every little detail of the memorial depicts something about the war, and I could understand why there would have been conflict over the building of the memorial – it’s very symbolic. I haven’t seen as many images of it as other memorials, and I know I’m not describing it as well as I could, so please look it up online!

Our next stop was a 20 minute walk away, across the parkway and along the tidal basin – the Martin Luther King, Jr. Memorial. It is such a cool memorial! It’s a huge slab of white granite and when you approach it from the back, it looks like it’s not finished. But on the tidal basin side is a 30’ tall statue of him carved onto the front, with one leg not completely carved.   He’s standing with his arms crossed and a serious expression on his face. It was dedicated in 2011, and he is the first African-American with a memorial near the National Mall. There were a few tourists around taking pictures, but I think people miss it because you have to walk so far to it. That’s unfortunate, because it’s worth the walk.

We continued around the tidal basin then, slogging through the dirty water that went over the sides, and trying our best to find higher ground without trampling on bushes. Franklin Delano Roosevelt’s memorial was next, and it was as different as it could be from MLK’s. It’s spread over 7.5 acres, and it’s a series of 4 outdoor rooms, meant to depict his 12 years of office. The water features weren’t working, so we didn’t get to see that effect. I found out later that Senator Hatfield had input into the memorial. My favorite area was the statue of Eleanor Roosevelt in front of a United Nations emblem, to honor her work in that regard. The quote is fantastic and inspired me for the rest of the day.

As we hiked to the next spot, Thomas Jefferson’s Memorial, I was taking pictures and lagging behind the other three. It was so hot. I was so hungry. Then I saw that I had a voice mail message and I was laughing so hard… the phone may be able to take pictures and be a phone at the same time, but the operator of the phone has to know how to use it first! I called my little sister back, and as I sat on the steps of the Memorial, I heard that she’d gotten a new job. SO EXCITING. I kept moving so people wouldn’t overhear me, and was crying I was so happy for her. They are lucky to have her working for them!

The memorial itself is beautiful in the round, but again, because of its remote location, it’s not visited as often as the others on the mall. The architect made a nod to the Roman Pantheon, Jefferson’s design at the University of Virginia and his own home. It’s all marble, of course, with a huge bronze statue of Jefferson in the middle. He’s never been one of my favorite men in history, so I was happy to keep moving.  I think the size of the memorial matches the size of his ego!

We kept going around the tidal basin, and walked up to the entrance to the U.S. Holcaust Memorial Museum, just to see if we could go in without tickets.  Normally you have to line up before 10 a.m., and they distribute the (free) timed tickets for the day.  We had planned on seeing it another day, but because we were right there, I thought we should take a chance.  We were able to go in immediately, which was good because it would save us returning, but bad because I hadn’t mentally prepared for it.  Dan and I had been to the museum years ago, and I still remember many of the rooms and exhibits.  To say it has haunted me wouldn’t be an exaggeration.  I do not care for war in any form and the treatment of these human beings was so beyond evil, it still makes me sick.

The museum itself is really well done.  You take a card that describes a person, and carry it with you to see how their story happened throughout the timeline, 1933 to 1945.  There are video’s, artifacts and tons of written information to digest as you walk through.  One area had pictures of a whole town of people that were killed – mostly artists.  The whole town was wiped out by the Germans.  After that, I took a little break in the ladies room and was still crying when another lady walked in.  She went to hug me and said she felt the same way.  Then she said that she thought I had a pretty emotional day on my hands, and that “Shelby was going to be just fine in her new job.”  What?!  Turns out she was sitting close to me at the Jefferson Memorial and overheard my conversation on the phone.  Nice to have the care and concern, but also a little creepy.

We only spent a couple hours in the museum, and that was enough for all of us.  That there were 42,500 ghettos and concentration camps erected by the Nazis is horrific.  That over 30,000,000 people have visited the museum since it opened is wonderful – hopefully that education will preclude another holocaust.  The quote below is the last one you read as you exit the main area.

We walked out into the bright sunlight and bought a huge pretzel and bananas to eat on our way to the metro.  The ride was easy, and we got off at our Vienna station and headed to the car.  We raced Dan by taking the elevator while he took the stairs, and barely beat him to the 4th floor.  Nice to have the laughter after the previous hours.

Now to the really exciting part of the day.  We met my “old” friend Lisa Smith and her very kind husband, Eric, at a local Mexican restaurant for dinner.  Both of them work nearby, so it was convenient for all of  us.  I was beyond excited to see her and asked her to please warn Eric how loud I might be, and she said she already had.  Plus, he’s married to Lisa, so how would my energy level be a surprise?!

It was lovely to see her again. She had been out to Bend in 1987, and we’d kept in touch, but seeing her in person was just heaven.  She was the intern coordinator (plus other hats) for Senator Hatfield, and she had her hands full keeping us all in line.  She did her job well, and also took us orphans under her wing to her grandparent’s house and other fun day trips.  She’s a true Southern Belle from Georgia, and Eric is lucky to be married to her.  They make a great couple and his sense of humor is a riot, so he can match her.  We laughed and ate and reminisced and I didn’t want to leave.  Some women just come into my heart and make such a joyous sound, and Lisa will always be one of them.  Thanks for dinner, you two!

The perfect ending to another perfect day.