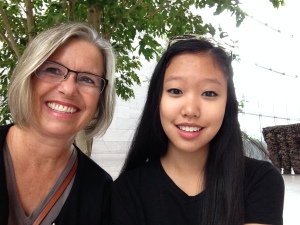 The girls are on their own again!  Woohoo!

Eliza and I headed out early, driving to the College Park Metro station to catch the train into D.C. on our own. The boys were tired of sight-seeing and wanted a day to do nothing, and Eliza and I were happy to oblige. We parked in a huge lot, hoping we could find the car when we returned, and put more money on our transit cards to get us into town. We got off near the Archives again, and went to see if we could learn something, anything, from their movie, which once again, wasn’t playing. Could someone please update their website? So frustrating.

We walked over to the East Art Gallery, one building I really wanted Eliza to see, only to find that the “minor construction” listed online actually meant that none of the galleries were open. NONE. Communication is an art also, wish someone in D.C. could learn it to make tourist’s lives easier! (Ooh, now I sound like I need a day off!)

We headed to the “Newseum” building next, thinking we could spend some time learning there, but it was $22.95/each and we only had 45 minutes, so strike 3, we just read a few of the headlines they had outside. They even had the front page of the Oregonian! Fun to see what various areas of the country put on the front page. We will have to look online later to see what exhibits they have inside because I’ve heard it’s good.

We made it to the National Portrait Gallery just in time for the 11 a.m. tour. It was the best tour of the whole two weeks in D.C. and I was enthralled. Our guide, Lillian, knows more about art than I will ever learn, and she shared with us in an easy going manner. Many of the paintings we saw were the originals, but we’ve seen the replicas in other museums. We’ve also seen the copies, done by other artists.  She was very specific that they only had originals or replicas.

The National Portrait Gallery is in the Old Patent Building, and the third floor has been restored to it’s original configuration.  We started there, and I’m glad we did because it’s so modern downstairs, you’d never guess what is upstairs.  The building was closed in January of 2000, for a planned 2 year renovation costing $42 million.  The two museums it housed got into a fight, Congress got involved, various donors ponied up a ton of money, and when it reopened in July of 2006, they had spent $283 million.  Comments, anyone?! 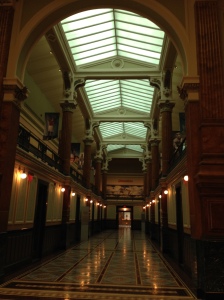 Next, we headed down to the second floor.  Lillian would stop at a painting, or someone would ask a question, and off she would go.  Our tour was supposed to be 45 minutes and after 90, she said we could leave if we wanted.  We only left because we were hungry!  She was truly an excellent guide and I’d be happy to share my pages of notes if anyone wants them.

Eliza and I choose the Lime Grill for lunch, a cute local mexican food restaurant, and we were half way through our burritos  before we figured out that we were eating each other lunches! So funny.  We had been so hungry, we didn’t even notice.  We walked around after that, finding Chinatown filled with African Americans and nothing to buy.    Lots of men hanging out, commenting on people walking buy, and it didn’t feel good.  We even went into the Galleria thinking we could shop there, but it was basically a huge movie theatre.  So we headed home. 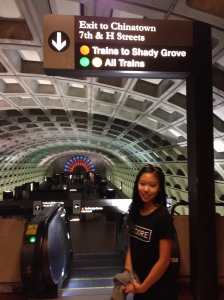 Our last time on the D.C. subway!  Maybe any subway for quite a while.  We like them.

So we headed home a for a few hours, then hopped back into the car at 7 p.m. so we could go see D.C. lit up at night.  The boys still didn’t want to go anywhere, and I really wanted Eliza to see it at night, so in we went.  I had been praying about this little jaunt all day, and I really had to talk myself into it.  28 years before I had been assaulted in broad daylight in this area, and I was afraid to go without Dan.  But I did it!  With a little help, thank you God.

We drove to the Washington Monument first, and it was beautiful to see lit up in the dark.  Just beautiful.  Then we went closer to the Lincoln Monument, I pulled an illegal u-turn, and we parked.  We walked past the Vietnam Vets memorial and up to Lincoln.  It’s even great at night!  Maybe even more so.  There were dozens of other tourists around, which was nice.  Eliza and I tried to get good pictures together, to prove that we did it on our own, but they didn’t come out too well, with or without the flash.  We sat and and enjoyed the view, watching other people take pictures, then headed back to the car. 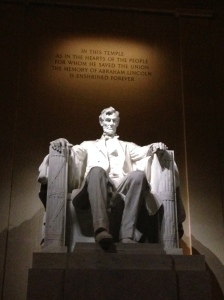 We drove down the mall to the Capitol and took pictures there, too.  It was warm, the sirens were blaring nearby, and I was enjoying being with my daughter.  I had done it!  I had brought her here in the dark and we were just fine!  Really special to share it with her.