It’s Saturday!  Yeah, no school!  Dan’s off on a long bike ride and I’m going the other way on my bike when he gets back. The kids are sleeping in, of course, and happy to do so.

All along the Overseas Highway that stretches the entire length of the Keys’ islands there is a bike trail of sorts.  Sometimes you ride on the road, sometimes you are off of it.  I ride off whenever I can because my recumbent rides low, and I don’t think people can see me as well.  After a couple times of having a side view mirror swipe my ear, I learned to ride as far from traffic as possible.  I have lost count of how many people I see texting and talking on cell phones.  My favorite was the lady doing her make-up, eating, and talking on her cell phone – with her arms steering the car because her hands were busy. Agh.

This huge iguana was all the way across the bike path and as I fumbled to get my camera out, he started to go into the trees.  He was about 4 feet long!!!  There was a smaller 3′ one to the right of him, but he was bright green and blended into the grass.  So cool to see!

This is my all time favorite spot in the Keys!!!   Vaca Cut bridge.  The water flows on this side from the Gulf when the tide goes out to the Atlantic Ocean behind me about 200 yards.  The pelicans swoop down, under the bridge or over, or from the trees, and plop into the water.  Not to dive for fish, but to ride the tide for fun!  They “talk” to each other the whole way and I imagine they are saying things like, “good ride today” or “dude, you should have been here yesterday for the tide”.  I stood here today watching for about 20 minutes and every other time we drove over the bridge I looked to see which way they were floating.  They were having fun.  I like that.

After lunch, about 1:30, the kids and I are going to the beach…!  This state park is only a couple miles from our RV park, so we will get to come every day if we want.  It’s a nice park, with a campground that would have been fun to stay in had we been able to get in.  It’s known for being excellent, so it’s full year round.  The wind was up today, so the kite surfers were out in full force and it was fun to watch them.  My heart stopped every time one of them would “catch air” about 20 feet high and I couldn’t watch one man who was having fun doing summersaults in the air.

Nate and I walked down the beach, and I was collecting shells and taking pictures.  He was exploring and enjoying the warm water.  When we got back to where Eliza was lounging, I went into the water again and was looking at a tiny shell when Nate said to me, “huh, I can’t get this off my hand” and I turned to see the blue part of a jelly fish on his fingers and his hand was swelling up.  I immediately took out my camera to take the picture below, so we’d know what it was and I told the kids to grab their gear and get to the car.

I asked one of the kite surfers where the closest medical help would be, and told him what Nate had touched.  He said, “Oh, not good man, he touched a Portuguese man-of war. You better talk to these people.”  We walked over to another group and they all agreed that it was serious, but that the ranger at the entrance could help us.

I drove to the ranger station, reminding Nate as we drove that I had told him AT LEAST A MILLION TIMES during this trip, NOT to touch jelly fish on the beach.  We’ve been to the beaches on the west coast!  We’ve gone all the way from Canada down the east coast and not once has he touched one, even when I swam with them in PEI.  We had just walked the beach together and I had said, “Don’t touch it with your hands” at least a dozen times.  He had picked up another kind of jelly fish with a branch and I had praised him for not touching it directly.  For some reason, at the end of our day, he picked one up?  With me standing right there?! 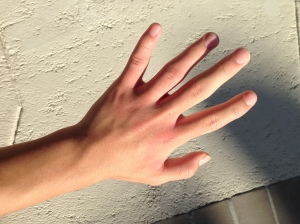 Here’s what his hand looked like right after he picked off all the blue stuff.  it went red immediately and started swelling.  He said it hurt.

So the ranger was non-plussed as she poured a hefty amount of ammonia right on his hand.  She said to be concerned if it got worse, but that this ammonia should do the trick.  The other rangers said that they’ve had kids covered with them, and that’s when they send them to the hospital.  They said to keep an eye on him.  Oh yes, I certainly will!  I wasn’t mad, just so concerned that he would be okay.  And frustrated that 13 years of saying “don’t touch” didn’t take root.  Pure teenager.

We got back in the car, and smart Eliza was looking up the Portuguese man-of war and what else we should do.  Turns out that the ammonia was the first thing, and then you wait.  We went back to the RV to tell Dan, then we all went to our pool and hung out.  It was 85 and beautiful, but we weren’t really noticing that.  From Eliza’s research, we knew he shouldn’t get it wet, so he had to sit by the side of the pool.  His left arm was hurting all the way up to his arm pit, but he was pretty calm about it and joking about it.  I just kept thinking, “in an instant, everything can change”, and was so grateful that it wasn’t more serious.  After a few hours, the pain went away and the redness did, too, but it took Nate a few days to want to go back to the beach with me.

This is our little pool.  Heated to 88 degrees daily, it’s saltwater and fun to splash around in.  Today we lounged and watched Nate.