Carrie and I were up early to exercise at her incredible gym, Shine Fitness, with 8 other ladies who value a good workout. Angela, the owner, was kind enough to allow me to attend her class at no charge, and gave me a wonderful t-shirt to remember them all by.  It was a great, hard workout and they couldn’t have been more welcoming.  Perfect way to start the week!

After a fun lunch at Big City, we all headed over to yet another bike shop to try to buy a tire for my recumbent bike.  Lucky me, Dan was able to fix my flat months ago, but the replacement tube we had for this flat was too big for the tire – even though they were both 20’s.  We didn’t know it needed to be a European 20, 406.  Now we know!

Our next stop was the Boise State Capitol and here we are in front of Idaho’s replica of the Liberty Bell.  Every state has one, with some being easy to find like this one, and others being hidden away.  We weren’t able to take a tour of the capitol because you have to make reservations two weeks in advance, and I hadn’t done so because we never even suspected that we would have to.  No other capitol we had been to required that!  We wandered around on our own, however, which was just fine.  Our LAST capitol of the trip and because we’d had an excellent tour in Salt Lake, we knew much of the area’s history.

Sacramento is the most impressive, inside and out, and we thought it was funny that the tour guide said Arnold’s governor’s portrait wasn’t hanging in the capitol yet because Maria wouldn’t give it to him.  Phoenix was dirty, small and sad, but their outdoor mall was really well done. Austin was huge and fun because we toured with friends.  Little Rock was forgettable – so  much so that we made plans to go back the next year when we went through because none of us remembered that we had been there before!  Nashville had school tours going on, so we cut our tour short for the sake of sanity.  We’ve always liked St. Paul for its history, location and view.  Madison was another favorite. Right in the middle of town, they are so progressive that they have their farmers market on the grounds on Saturday and the place was hopping inside and out.  The tour of tiny Montpelier was excellent from start to finish and the capitol is beautiful.  You can skip Concord if you’re in the area, ick.   Boston was closed for some strange, unusual reason, and Providence was closed for Victory Day, which we’d never heard of. They are the only state to still celebrate this day on the second Monday in August- Victory over Japan.

I’m a little biased about the nation’s capitol and I think everyone should visit!  I loved seeing it again, and even with all the security changes, it’s a magical place. The story of our history depicted in the building and on the hill is incredible.

You can skip Richmond, too.  Our guide thought Virginia was the only state in the nation and continually referred to everything as “we are #1” in this and that.  It got to be a little bit much.  The capitol served as headquarters for the Confederate Army, too, but the building itself isn’t noteworthy and they’ve done a weird visitors center underneath it.

Eliza and I toured Jackson one Saturday afternoon after washing the dogs, so we were filthy. We didn’t expect it to be open, then didn’t expect to be let inside. They were in a special session. We didn’t stay long, so I would go back someday for the full tour.  Plus, I NEED to see the Sweet Potatoe Queen Parade.

Once again, Little Rock wasn’t memorable, but worth an hour to see the statue of the Little Rock 9 on the outdoor campus.  Oklahoma City was the only capitol to have a working oil rig on the grounds, which is so appropriate for their area.  Beautiful remodel on the inside.  We’ve always liked the Denver capitol for its history, location, and the famous step outside which is one mile above sea level.  The funny part is that different groups  keep measuring and so they move the marker!

The Santa Fe capitol looks like any other corporate building from the outside, so we weren’t sure we were in the right place. It is in the shape of the Zia Sun Symbol, which is a circle with four points radiating outward.  It is also on their state flag, too.  It represents:

We had to make an appointment, but we called the same day and got one for an hour later.  Our guide was a college student who was working there for the summer and was able to answer every question we had.  Santa Fe is famous for its art and the capitol has over $6 million worth hanging on its walls.  We could have spent a week and not seen it all. They are juried in and most of the art is by famous local artists.  It’s the best art we’ve seen anywhere on the trip.

Salt Lake was a nice tour and a great view from their hill.  Their remodel and earthquake prepping is amazing in its scope and expenditure.  So Boise was fun because we toured with Ryan and Carrie and the kids. 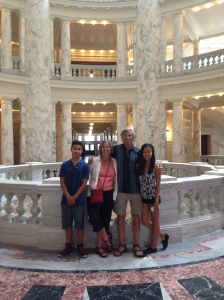 Our last capitol (Well, until we drive to Salem someday…!)