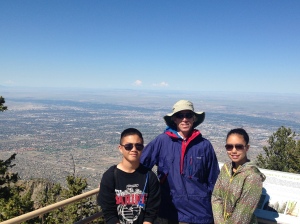 We drove from Santa Fe to the top of the Sandia Peak overlooking Albequerque today, and it was well worth it – look at that view!  At an elevation of over 10,000 feet, it was cool and beautiful.  We choose to hike across the top this time, instead of doing the tram from the base up, because the wind was blowing pretty hard and we’d ridden the tram before in wind and didn’t care for the feeling. That’s putting it mildly.  It has one of the longest spans in the world, and we never felt safe.  So this time, we’re hiking it!

While waiting for the visitor center to open so we could get a map, we were attacked by hummingbirds.  They went after Nate and his red pack and Dan’s purple jacket.  It was so neat!  You have to look, but the hummingbird is in the picture…

About 1/2 way across the top, we veered off to the right of the trail so we could check out this hut.  Built in the 1930’s by the CCC men, it’s a marvel to still be standing.  Originally split into 2 rooms inside, it has fireplaces on both ends.  We love these old buildings! 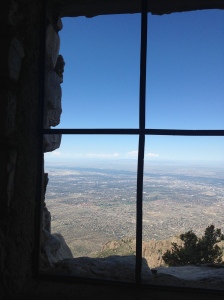 Here’s the view out of the back of the building – pure, flat Albuquerque!  I struck up a conversation with another photographer after we were both laughing at how many pictures we were taking, and joking about how much that would have been in film costs years ago.  I hiked the rest of the way to the tram with him and learned that I was born on his birthday 77 years later, he’s a retired school teacher, and he’s taken his RV to more places than we ever hope to go.  It is always SO fun to talk to people who are like-minded about travel.  I don’t have to apologize for this dream trip of 19 months to people who think we’re crazy and I get to learn a ton more about other places we want to visit someday.  Plus, I meet awesome people! 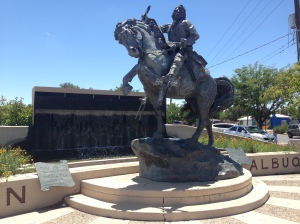 After the hike, we went into Old Town Albuquerque and had the best frozen yogurt ever.  Or it could have tasted that way because we were so hot! The valley was like an oven.  We walked around for awhile looking at all the tourist shops with the same stuff in them, and headed back to the car.  We drove through the newer downtown to show the kids, and were pleasantly surprised to see that it’s had a little revitalization since 1997.  It hasn’t taken off, but it was better and there weren’t as many bars on the windows. We considered moving there years ago, but once we saw the crime rate, we didn’t go.  The next day on the tv news they interviewed a couple from California who had everything of value stolen from their RV when they walked around Old Town.  Still not a safe area for tourists or locals, darn.   Beautiful, yes, hot, yes, safe, not so much.

Back at the rig, we all collapsed for the evening.  After leftovers and showers, we all fell asleep very easily.  Elevation and heat take it out of you!