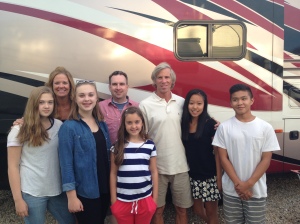 We’ve been looking forward to spending time with  Ryan and Carrie’s family for months!  We finally got to meet their adorable daughters in person when they came to the RV for dinner.  Dan donated a kidney to Ryan on July 2, 2012.  Carrie is Dan’s cousin, Ryan is her husband.  Dan’s mom and Carrie’s mom are sisters.  It’s a miracle that the donation came together as it did, and this was the first time we were able to celebrate Ryan’s health and Dan’s donation together.

In 2012, Dan had started the process to donate a kidney anonymously.  For years, he had wanted to give this gift.  There are over 80,000 people on the waiting list for a kidney, so we knew it wouldn’t take long.  Meanwhile, in Boise, Ryan’s kidneys were failing and he was going to be put on dialysis, waiting for a kidney.  Carrie posted a prayer request online that Dan’s mom Helen forwarded to him and after Dan read it, he told his mom he would start looking into the chance that his kidney might be a match for Ryan.  When Dan and Carrie talked on the phone the next day, it was the first time they had met! They are cousins, but Carrie is much younger and they had lived in different states their whole lives, so had never met.  Ryan and Carrie then had to decide if they wanted Dan to start testing, as you can only test one donor at a time. Ryan has many siblings, but for health reasons, two of them were already unable to donate.  In Ryan’s case, a sibling’s kidney might end up with the same damage as his own because his body would attack it, too.

Once they decided yes, Dan finished his testing in Bend and a date was set for all of us to be in Seattle.  It all went very fast.  We cancelled a vacation to Yosemite, and instead spent my 50th birthday literally running from doctor to doctor to make sure Dan was cleared to donate.  We had a scare when spots were found on his lungs and had to make the informed decision that it wasn’t cancer, and many doctors agreed.  (It was probably calcium deposits from inhaling grain dust and other things growing up on the farm in Iowa.) Still so scary that he was risking his life for someone else and might have health problems of his own.

But we were praying constantly.  For guidance. For peace about the decision and the timing. For Dan’s safety during the surgery and for success and health for Ryan after the surgery.  As you can see by the picture, Ryan is healthy!  He had a harder time than Dan did after the surgery and still has to take medication, but he’s a different color than he was the first time we met him (3 days before surgery) and he’s living a full, happy life with his family, thanks to Dan.  Dan’s recovery was minimal thanks to an incredible surgeon and the great physical shape he was in.  (Anyone can donate, please look into it!)

We spent two weeks in Seattle before Dan was released to go home, but we didn’t spend much time with Ryan and Carrie because he was in the hospital for longer and having some difficulties. We were so glad that the surgery had gone well for him, but we didn’t want to be intrusive.  Dan had undergone a battery of tests before the donation, including a psychological one regarding his feelings if the donation didn’t work out.  He said that he’d be fine if the kidney “didn’t take” for Ryan, but in reality, he still felt responsible and so was happy that the surgery worked for Ryan.

The next few days are our chance to spend time with Ryan and Carrie and the girls and we are so grateful for the opportunity.  Look out Boise, here we all come!