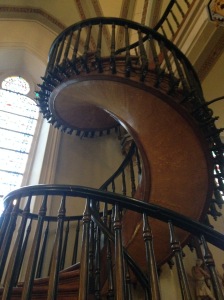 Here’s the famous Loretto Chapel staircase!  A block off the main Sante Fe plaza, I’ve been wanting to see it for years and here we are!  We waited in line in the rain to get in, paid our $3 each, and into the tiny chapel we went.  We lucked out because they were closing at 4 p.m. for a wedding.  We had just been locked out of the St. Francis of Assisi Catholic church for that very reason, so we were glad to get in here.

The story goes that the staircase was built for the nuns by a carpenter who just showed up one day, Jesus.  It was a miracle that is was built this way, without supports.  Originally it didn’t have a banister, but it was added in later years because the nuns going up to the choir loft were having a hard time navigating the steep steps. This picture doesn’t do justice to how stunning it it; please Google it!

We sat in a pew to take it all in, but it was so crowded with other tourists that we couldn’t hear the recording over the speakers about the history and about the Stations of the Cross around the perimeter.  I did hear 4 different languages being spoken, so that was fun. Santa Fe is so much more cosmopolitan than Taos, it’s like night and day.  One word to describe Santa Fe would be “bling”. Major bling!  The tourists had on more jewelry than I’ve seen the whole trip.  It was crazy.  Huge rings.  15 bracelets.  Earrings dripping to their shoulders.  Much of it was southwestern style, but there were some really artistic pieces, too.  It was “in your face, here I am” jewelry!

Or it could have been that I noticed because I was on the hunt for a pair of earrings. When Dan and I travelled through Santa Fe in 1997, we were saving for our 1998 epic trip, so I didn’t buy a pair of earrings that I had fallen in love with on the plaza.  I have few regrets in life, but that little pair of earrings was one of them. So silly! Should have just bought them.

So this time we hunted all over for my favorite pair.  We saw gorgeous, gaudy and everything in between.  I finally bought a pair of silver and turquoise drops from Ronnie, a Native American who sets his blanket out everyday in front of the Palace of the Governors.  At $75, I should have bought the pair years ago!  Who cares, I love ’em.

We toured 3 of the history museums, then hit Georgia O’Keefe’s fancy one. To say I was happy is an understatement.  I couldn’t believe we were there!  We just happened to make it for the last docent guided tour of the day, and it was so special.  This docent knew her Georgia and she told great stories about her and her life.  I had included her in a feminist themed paper I wrote in college, but back then the research I did was by book, but the guide knew a lot more.  Georgia won an art contest when she was young, after being taught to paint a certain way by the teacher. She hated painting that way so much that she put away her brushes for 4 years and went to Texas to live the “cowboy” life.  That’s where she strarted to find her own painting style.  Strong woman.

I didn’t know that her photographer/art dealer/boyfriend/then husband took nude photo’s of her and released them to the press, unbenownst to her, just as she was becoming famous.  What a jerk.  She was upset and headed out west on her own, and ended up spending as much time as possible in the Santa Fe area from then on.  Of course, the male press then reviewed her paintings with a sexual connotation for years.  Jerks.

I also didn’t know that she was friends with Ansel Adams, and that he was one of only two people who was allowed to see what she was working on before it was finished. They’d take her old Ford out to the desert and paint and draw and take pictures for hours.  He’s another one of my favorites because of his fantastic pictures and love of Yosemite.  So fun to find out that they were friends; that wasn’t in my paper.

We ended up the day at a local Mexican restaurant that the lady at the RV park had HIGHLY recommended.  Let’s just say we wish we would have eaten at Taco Bell down the road.  They took forever to take our orders, got Eliza’s wrong, and had skimpy portions.  Ugh, all that for $68.  Their homemade salsa and chips were the saving grace of the meal.

In between rain storms, Santa Fe is beautiful.  The flowers, artwork and colors all over make it feel very welcoming.  Just bring your full wallet; it’s expensive.  And buy those earrings on your first visit! 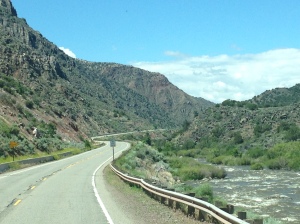 It was another drive day and I took about 30 pictures between Taos and Santa Fe – it was gorgeous!  Bright blue sky, winding road and good travel companions – perfect!  It was only a 70 mile drive, so we just took it easy and enjoyed the drive.  It’s always hard going from a one campground or RV park to the next, because we really start to like where we are, and you never know what the next place will be like.  We were right to be apprehensive about the Santa Fe RV Park! 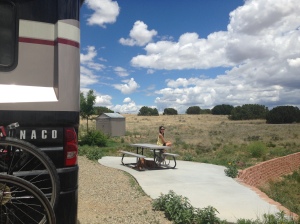 This is our site for the week, isn’t it beautiful?!  Isn’t Eliza adorable?!  Look at that sky and space all around us!  But check out the little storage until behind our table – the guy next to us obviously lives at his site and during the early morning and late evening, he would scurry  between his trailer and the storage unit.  We couldn’t see what he was taking back and forth, but we would love to know.  It was so funny!  We only saw him in the flesh one time and as we said hello, he practically ran for his trailer.  Not as sociable as our neighbors to the left who also lived at their site and had 4 cars.  We could barely squeeze our car in behind our rig and had the “pleasure” of listening to them party all week.  Ugh.

And that’s the way it is on the road.  Some places are incredible, and some are busts.  That’s what makes it such an adventure.  Wouldn’t change a thing!