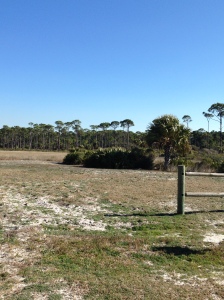 These are the days that I live for on this trip… here is where we studied today! That was my view!  Palm trees rustling in the wind! The campground itself doesn’t have wifi, and we didn’t feel like driving the 20 miles into Port St Joe for the library again today, so we went near the closed concession stand, moved a picnic table out of the wind, and did school on their wifi.  (It’s for everyone, always crowded.) Eliza and Nate worked in the car, then they’d come out, then back to the little car they’d go.  I had to be outside, even if it was windy and cold.  (Did you know that you can’t touch your phone and get it to work with gloves on?!)  So I studied for my real estate exam here; rough life.

Then Nate and I went for a walk down the bay beach.  It’s only about a mile long, but is a crescent shaped little piece of paradise.  The water is so clear you can see every hermit crab going in and out of his shell, all the scallop shells that I need to collect, and tiny fish trying to hide in the brown grass.  We were throwing rocks and once again, I have to admit that Nate beat me.  He can throw about twice as far as me now, wow!  We found a huge dead turtle that looked like he’d been there awhile.  (I talked to the ranger later and he said it probably died from swallowing plastic bags.)  Nate tried to pry the back off so we could see inside, but it was too tight.  We found tons of cannonball jellyfish and dropped a shell on one to see if it would respond.  It didn’t.

Then we’re walking along on our way back to Eliza and Nate says, “oh, look, there’s an octopus”.  We couldn’t believe it!  He was just the most rich color brown, gliding along next to us, about 10 feet out. Then he’d stop and spread out.  Nate kept walking, and he’d follow.  We tried to see if he was following Nate’s shadow, but he didn’t do it every time. 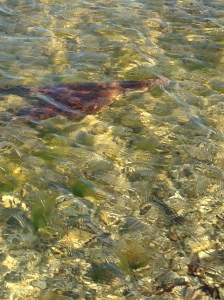 I asked Nate to run back to the car and get Eliza so she could see it, and then I yelled to an older couple that were in the parking lot to come see, too.  They were from Canada and were just as excited as we were.  We’ve never seen an octopus in the wild!  Only in aquariums and movies. This was much better. 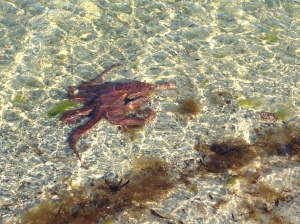 So he swam along side as we walked, then we’d stop, and he would, too.  I yelled to another family that was down the beach, and then waited for them to catch up to see it. They were from Israel and the son just kept saying “a real one, a real one” as I walked away smiling.

I LOVE days on the road like this.  To explore with my family and be outside.  I do not care one whit for fancy clothes, cars or houses – this I care about.  I am so glad we made all the sacrifices we did for this trip.  It’s worth it for days like today.

See – I could be so much worse – look at all those shells just begging to be turned into a craft project!  I am going to make that screen door that I saw on Cape Cod and I need good, unbroken shells!  How can my family think I’m obsessed?!

I walk the dogs by this spot every morning and watch the sun rise over  Port St Joe bay.  Sometimes there are people on the bench, but usually it’s just me, the dogs, and the deer.  it’s such a perfect way to start the day and I am so grateful to be here in Florida to see a sunrise like this!  I am the luckiest person ever!

Some family members who I will not name think I have an obsession with collecting shells – not me, I’m HAPPY!

Pulled out of our campground in Ocala early this morning – 8:14 a.m. – and hit the road.  Aren’t these trees gorgeous? This is the country road that I walked the dogs on each morning.  Jessica scared the cattle, Lady wanted to play with the miniature horses, and I loved it all.  It was a nice week in the country, but… the road calls.

Can you hear me screaming?!  I was, loudly, every time we came around a corner to this view of the Gulf.  We were back on the water and I enjoyed every moment of it.  The rest of my family isn’t nuts about water like I am, so they’d look up from their devices, mumble, “oh yeah, Mom” and go back to whatever they were doing.  I took about 50 pictures like this because every one seemed to be a better view.  We drove through little towns and there were road signs for deer, bear and then a bear with a cub – but we didn’t see any of them – just the heron and ibis and seagulls over the water.

We arrived at the St. Joseph Peninsula State Park promptly at check in time, 1 p.m., and drove to our site.  I planned on a 15 minute set up and then we would hit the beach.  Ah, best laid plans.  We got to our site, #33, only to find someone still in it and stuff spread all over – it didn’t look like they were a few minutes late pulling out, it looked like they weren’t going.  I was in the tow vehicle, so hopped out and went up and knocked on the RV door.  A dog barked.  No answer.  I knocked again and out came a couple who were not happy to see me.  I had obviously woken them up from a nap.  I asked if they were leaving and he said, no, they had the site for the week.  Then he showed me that the markers for the site numbers were behind the site – so I had knocked on the wrong door!  Oops!  So sorry!

So off to the next site I trudge and the young guy opens the door and says, “hey, yeah, uh, we were thinking about leaving” and goes on to explain how it’s not time yet.  The park ranger who checked us in specifically said to make sure we kept one clock on Eastern time, because we were right on the border of Central time, and phones/devices would go back and forth and you’d end up not knowing when supper was.  This guy said he was on Central time, so he had another 45 minutes, and shut the door. You’ve got to be kidding.  We’re blocking the road, and Dan doesn’t want to go back around because we had to go through some palm trees that scraped down both sides of the RV to get into this part of the campground. So he pulls into a nearby site and suggests I go talk to the ranger up front.

Which I do because I want to get to the beach NOW! I drove up to the office again and she said she’d send two rangers out to deal with this delightful young man. By the time we all got back, he pulled out and waved jauntily as he drove by.  Nerd bucket!

So an hour later we’re walking on the beach.  It was all worth it. 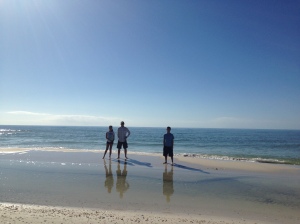 Look at the color of that water! And it’s sunny! And we’re in shorts in February!

Sunsets are a big deal in Florida.  People stop for them, plan where to go to watch them, and revere them.  I’m right there with all of it.  You have to look this state park up on  a map so you can see how it sticks out into the Gulf.  The sand is clean and white, the wind blows gently, and the sun sets majestically.  There were about 20 of us on the beach and we all stayed until it was completely down, then quietly walked back to our sites.  Another perfect day on the road.